the first mavic was a masterpiece in many respects: the first affordable, reliable, small drone with a better than decent photo quality. i praised the device → a year ago when i had flown it for a couple of months. in the meantime i’ve flown it 22 hours in total before i sold it to a gilder pilot last week.

during the last months DJI released a platinum and an air model which did not really interest me. but the new mavic 2, just released two weeks ago, did. i flew it only once, this morning. here are my first impressions:

the drone is significantly heavier (about 100 grams, which is more than 10%) and feels slightly more bulky, although it’s not really bigger in size. i still have to get used to holding it, because it’s covered with sensors which i don’t want to put my fingerprints on.

connecting everything and calling up the DJI Go 4 app which i had used with my previous mavic, worked, but registration of the new drone failed. i uninstalled and reinstalled the app, then registration worked fine. however, the drone wanted a firmware update, which failed. it would have flown with the current firmware, but it wanted to be updated. many customers have that problem. we never had it with the mavic 1.

my workaround was this: i uninstalled the DJI assistant software from my PC and reinstalled it, in version 2. i connected the drone via USB and could get the new firmware loaded into the device. it took about 15 minutes.

having set up everything for flight again, the controller moaned. it wanted a new firmware, too. after one error message it worked. 5 minutes or so, then the drone was ready to go.

it starts up differently from the predecessor, with much less power, quite sweet actually. when taking off it was obviously more quiet than the mavic 1. i flew it in P-mode and had the impression that if flew somehow more precisely, although i never had a problem with flight precision of the mavic 1. very nice to fly. and very fast.

i tried out two quickshot modes, the “dronie” (which basically is an animated selfie where the drone shoots away and keeps me in focus all the time) and the “circle”. the object recognition is so super precise, the UI of the app is elegant. not comparable to the previous model, excellent.

i did not have much time to check things out and flew the drone home after 20 minutes or so. the battery indicator still was in the middle, so i could have flown quite a bit longer.

the camera? later, folks. no time for that today.

this is a series of photos i took within 5 (!) minutes. details of a legacy video editing card for macintosh PCs. i used the → moment macro lens for this, attached to my google pixel 2 XL phone. i initially had problems with the lens because it has an extremely shallow focus distance, and the smartphone camera constantly tries to override this by searching for sharpness and not finding it. so all you can do is put the lens close, actually very close to your object and look around. moment is a startup company which currently ships another amazing lens which would cost 20.000 € on a canon EOS 5D Mk V. it costs about 100 € for my smartphone. haven’t received it yet and will keep you posted. oh, what lens? anamorphic…

these images were my first ones with a macro lens on my smartphone. the lens comes from → moment in the US, the → smartphone from google. the lens does a great job but lacks the option to focus properly.

let’s start with an original resolution:

the word “Zeil” (actually from the town of → zeil in germany) is a detail of the image below:

the next images were taken in the cologne wikipedia “lokal k” with the assistance of raimond.

i’ve known pixar renderman since ca. 2005 when it first came out as a plug-in for (then) alias|wavefront maya. at that time it was the king for soft lighting, less technical than mental ray, with often unrealistic but beautiful results.

over the years i lost contact, and in recent months the → arnold renderer by the spanish programmers from solid angle served all my needs. it is just an amazing tool for lighting, texturing and rendering.

renderman is a direct competitor, and this is my first attempt to use it for a maya scene about → NURBS modeling. i’m quite impressed. the scene has a global and three local light sources. the NURBS fillets are depicted as highly reflective. nice, and not hard to set up.

computer gamers would love this. it’s a very versatile house, made in 3D, of course. you can enter from different sides and angles, but you cannot use the same entry points for exiting the house. i won’t show it here. i’ll only show how versatile the house can be from the outside. technically i used Maya 2018, the prosets plug-in for 1 minute modeling of a cylinder, a toon shader and two lights. 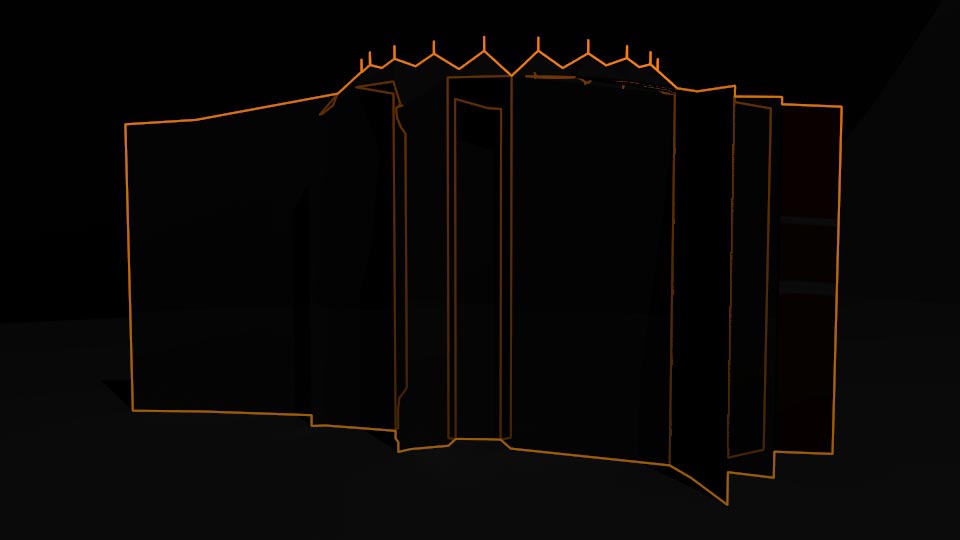 the house in black with orange 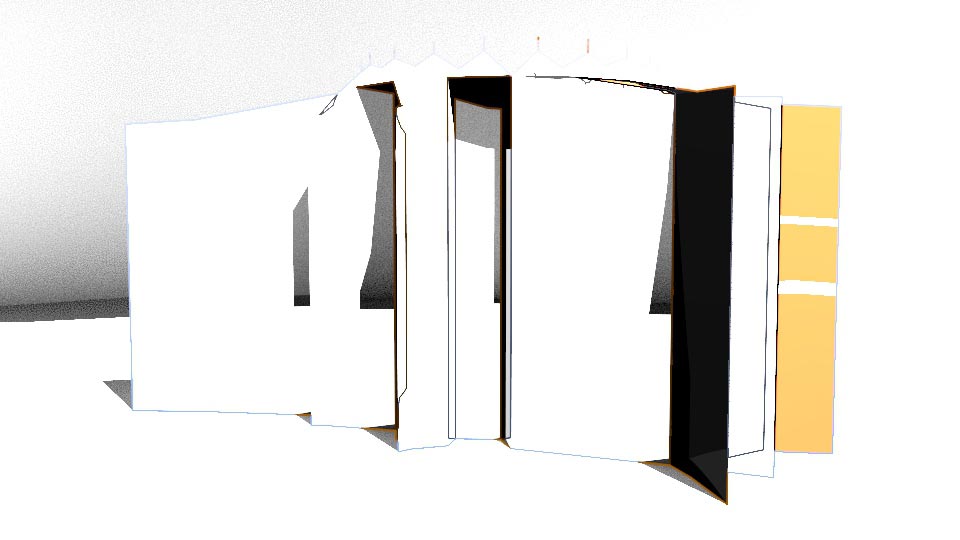 the house in white with some yellow 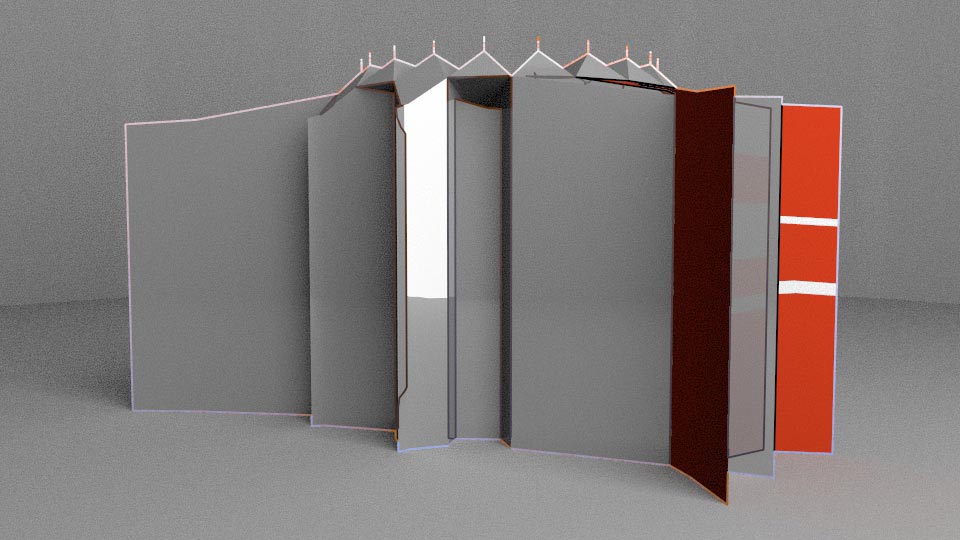 the house in grey and some red 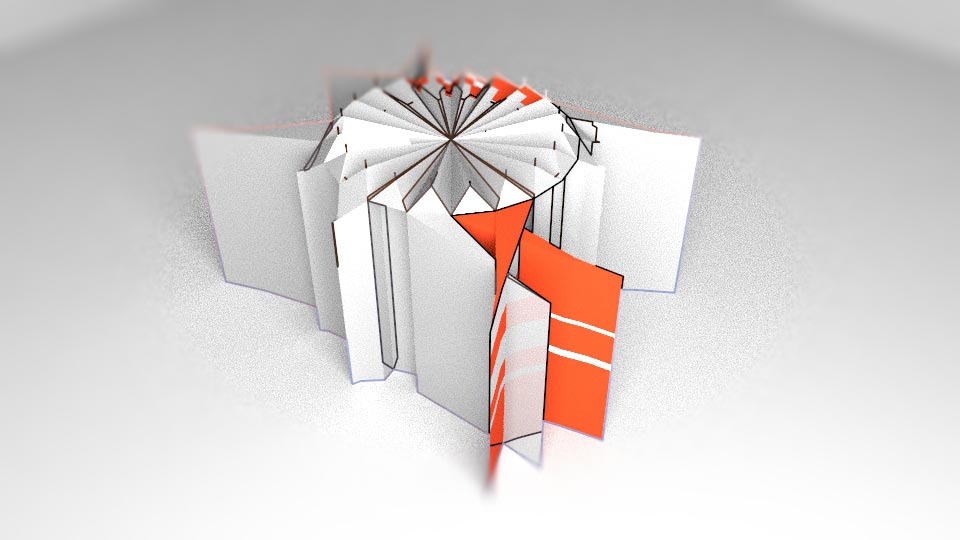 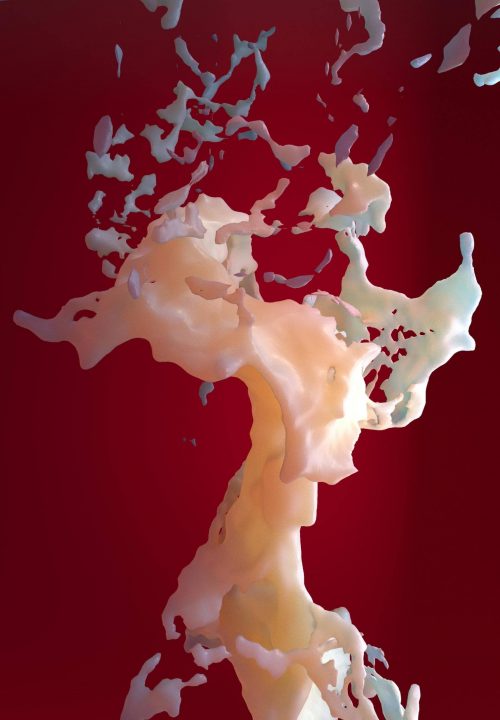 i run a youtube channel, free of charge, about computer animation. since the channel reached a critical amount of subscribers, every new tutorial i upload receives one (and in most cases only one) negative review by a thumb pointing down. since that happens typically only few minutes after publication of the video, i guess it’s a bot at work. but what kind of bot, and to what purpose? 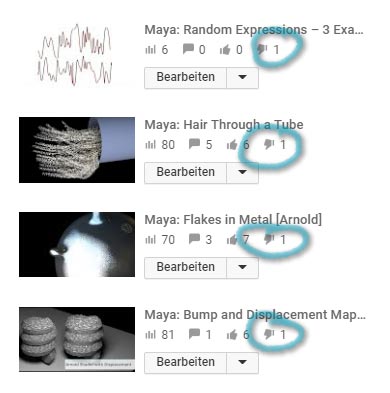 thumbs down within minutes 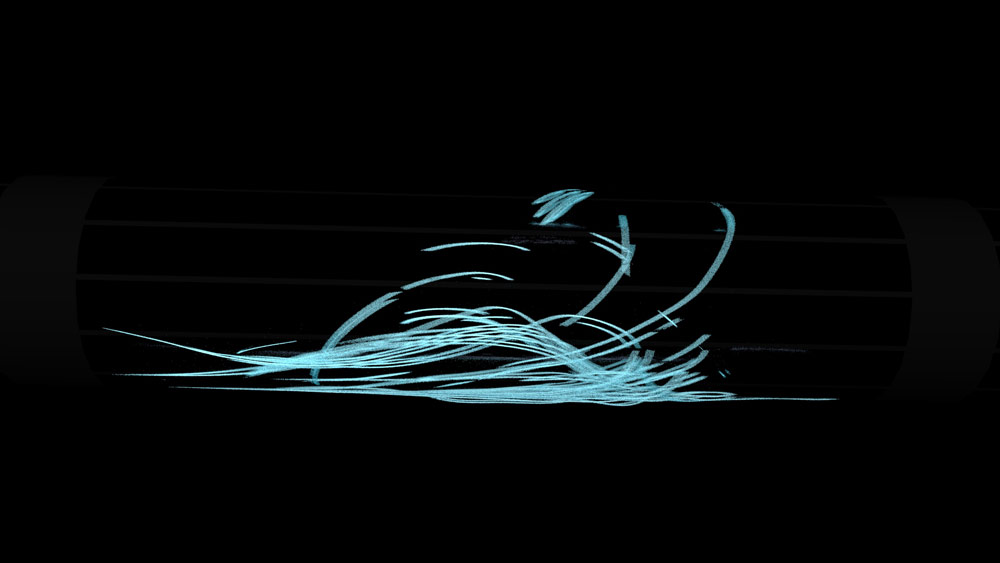 shooting follicles through a tube

→ here’s the tutorial for this. 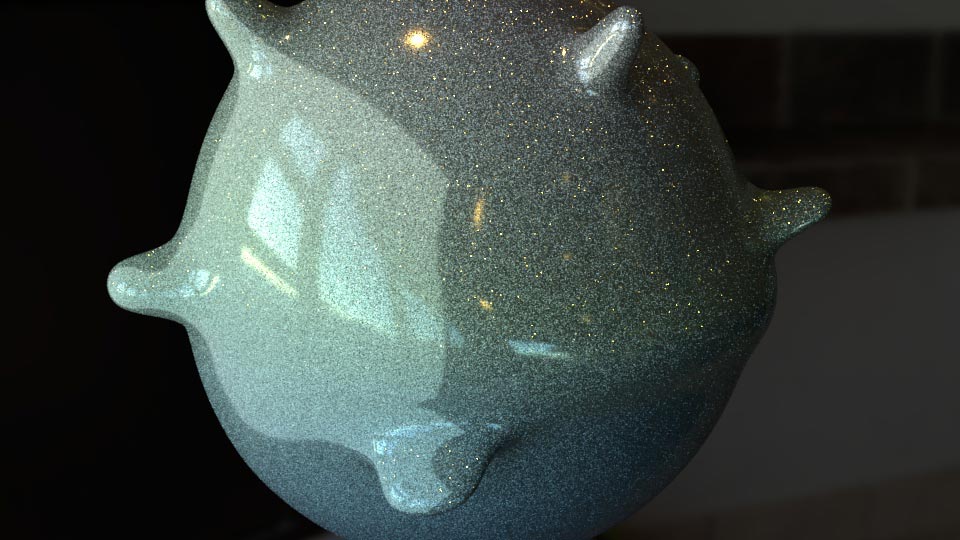 flakes under the surface. © ms

interesting word, GEAR. usually it has no plural. “packed all your gear, hombre?” but in mechanics, it does. i hope i am not mistaken. enjoy the rendering. the original is 9000 pixels wide.

this horse was an “accident”, at least not planned in any way. initially i wanted to model a small, almost cubic room with subtle deformations of all three visible walls. then i thought, nice, let’s cut out some windows. after having done this (a matter of seconds), i needed a light, a light from the back, a strong light from the back, a light with so-called “god rays”. well, then only one thing was missing: a 3D object. i picked the default horse (from maya’s built-in library of 3D meshes) and coloured it red. didn’t look good. blue? yep. the rendering at the very bottom has a slight overdose of depth of field (DOF). nevertheless, quite cool.

the whole work was done in maya 4, which still sits in my computer. i imported it later to the current version for the screenshots. 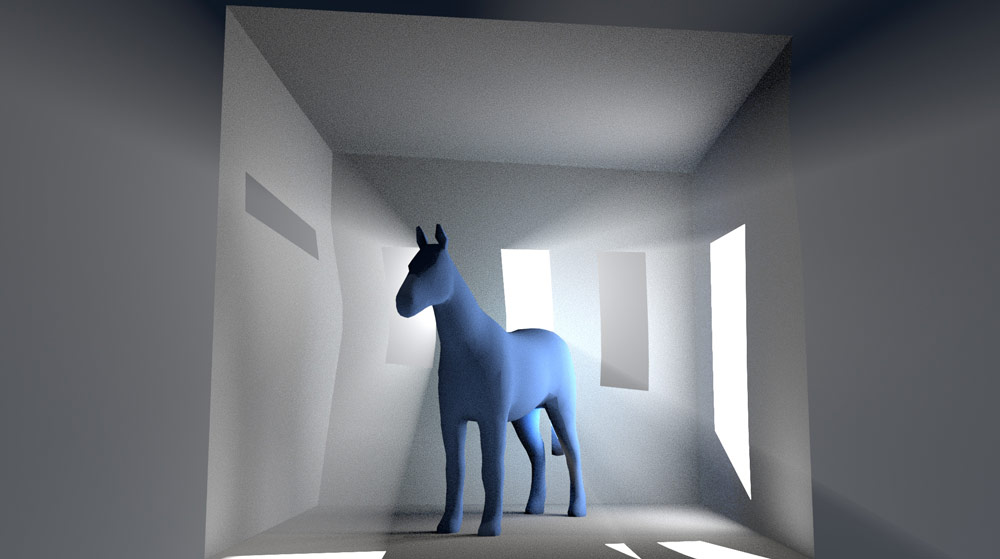 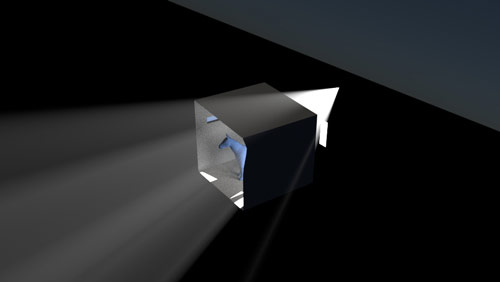 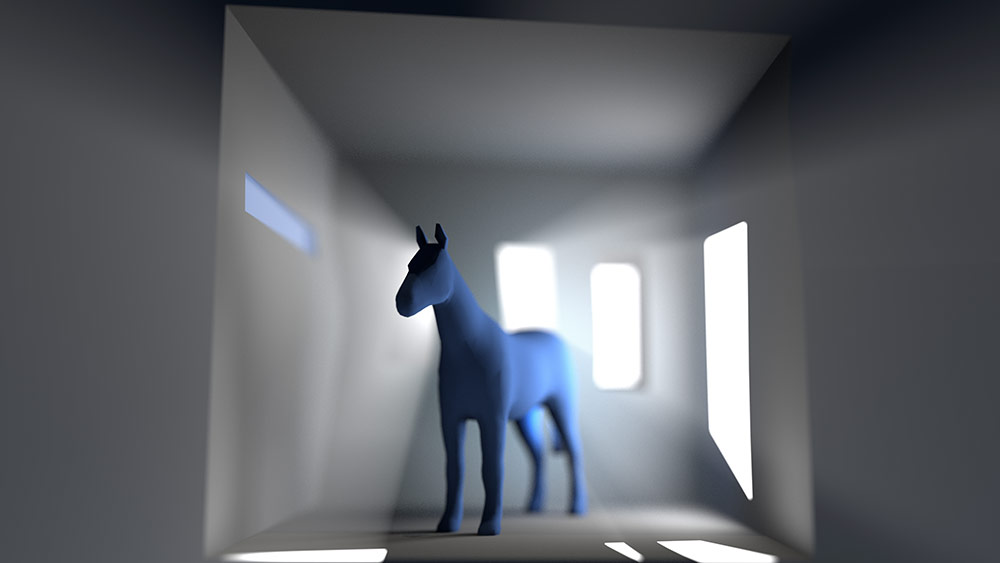 same scene, thin focus plane and an extra in the left window. 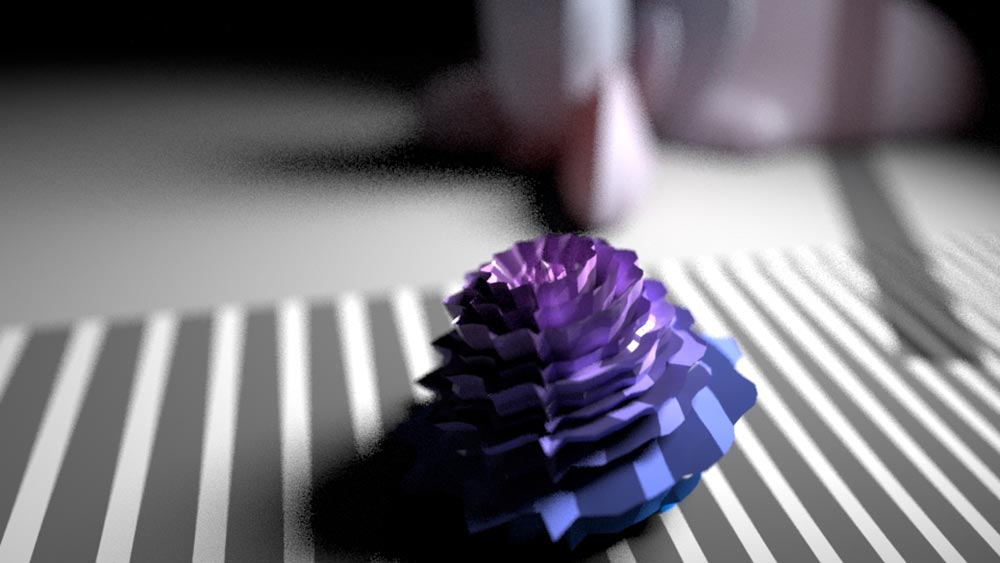 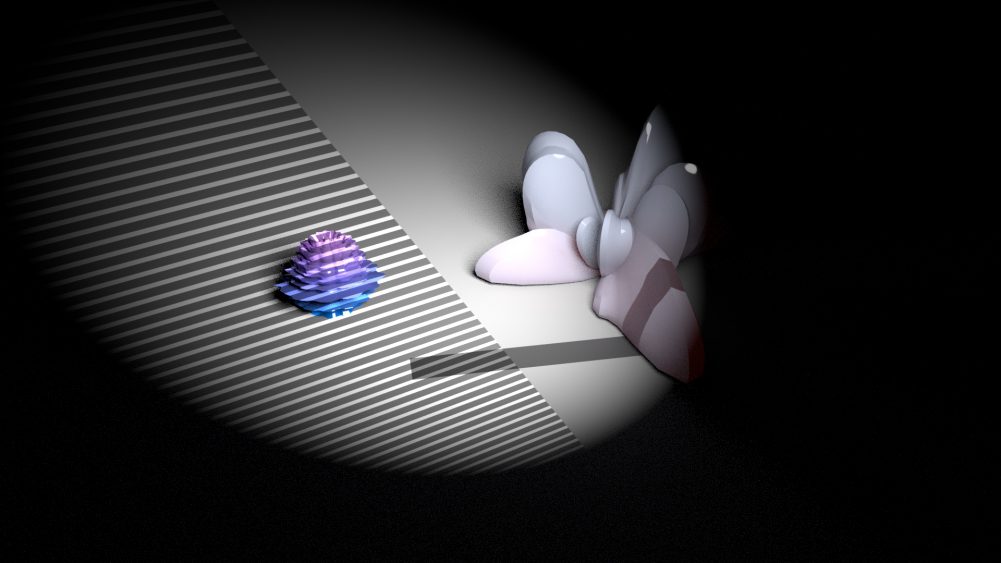