the drone and gimbal manufacturer DJI in china has a growing international reputation – and international outlets and support agencies. i talked to the german branch yesterday via chat because i (not the first time) had a customer support problem: i had ordered a few accessories for my DJI drone last week and hadn‘t received a shipping notice. since i‘m currently on the azores (portugal) i had entered a portuguese address as the shipping address and was slightly concerned about the delay. i gave the support chap my order number and he immediately replied that there was a shipping problem:

his reponse, translated into english:

our system found inappropriate letters/symbols in the address. unfortunately this can only be changed by our collegues who also handle portugal.

the inappropriate letters/symbols were obviously portuguese umlauts, so nothing strange at all, trivial for all international carriers and shipping agencies. but not to DJI.

when i asked the guy what he would recommend, he gave me dutch DJI support phone number and asked me to call them. i said that would cost me time and money and asked him to contact his collegues. he said he can‘t ring external numbers – and recommended me to cancel the order immediately. which i did.

when cancelling an online order, you usually get a receipt of this action via mail a few minutes later. not so with DJI: it took 12 hours when an email came telling me that my order is being checked. whatever that means. certainly not money back within a day or two.

probably due to the intervention of @DJIsupport i got the money back within 1 day (paypal). however, although the company knows the problem and that i am in need for at least one extra battery, they did not come forward with a solution. i‘m not the only one. here a posting from today on twitter: 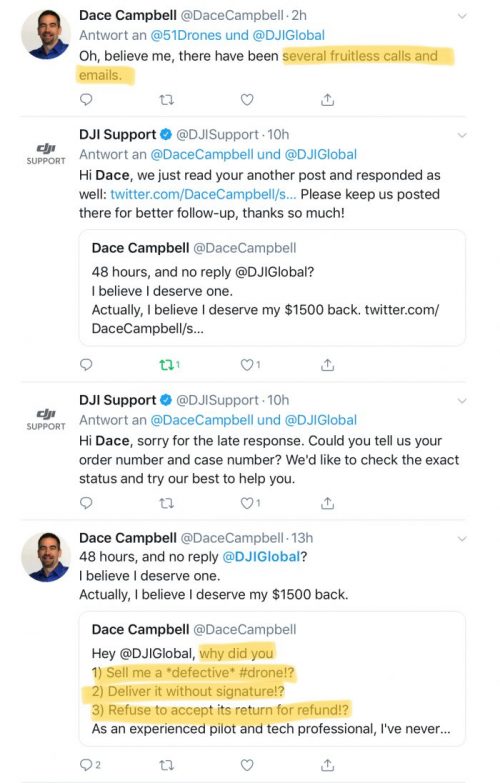